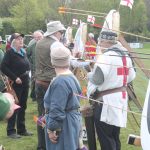 Sunday April 28th saw this year’s St George’s longbow tournament held at Adel. (It is normally held on the nearest Sunday to St George’s Day, April 23rd, but, because of Easter falling late, St G’s day had been officially moved to April 29th, so we were quite close!).A field of 23 archers assembled under the warm spring sunshine, which quickly vanished, giving way to a cold, overcast day with a chill breeze. A hardy lot, these longbowmen. It was quite noticeable that the adjudication for best Golds was easier than usual, as the custard was rarely, if ever, clustered. The traditional pie and peas lunch was welcomed, and delicious.The afternoon proceeded smoothly and coldly. The “Agincourt Volley” to round off the main shoot was dramatic, as usual, though, naturally, there was one archer who loosed on the command “Draw” and saw his arrow waver to fall about 20 yards short.The shoot-off for the Armouries arrow saw the usual remarkable accuracy (from some). But it was only after the targets had been dismantled that we discovered a tie. This was not covered in the rules. so the organiser decided to award it to the archer who had scored the better in the main round. Better prepared next year.Our Lady Paramount, Marisha Marritt, performing her tasks with demure grace, declined the offer of a bottle of wine for doing so, and opted instead for a tub of Haribo.It was that sort of day.

The full results can be found HERE.