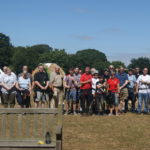 Quiz question. What archery competition contains instruction on eating three different kinds of cheese, requires knowledge of when Hornsea pottery was founded – and gives a starring role in Jurassic Park to Godzilla? Of course, regular readers know the answer. It is the annual “Strawberry Shoot”, which played out on Sunday 22nd in baking heat. All the old friends were there – shooting the pig, the snake and the zombie, a small clout, forfeits (some slightly off the wall – see above) and the wrong-handed target. This year’s topical target was based on the year 1948 – of course. Added spice came from the presence of archers from Bronte, for the return fixture after we took all their chocolate rabbits at Easter. The shooting was rounded off with Darren’s moving target, hauled across the field in an act of sadism by the two smallest young lady archers. Who can forget the sight of certain archers shuffling safely behind the shooting line to catch up with the target? Scores fluctuated wildly, thanks to the random effect of forfeits, strawberries and polo mints (on the toss of a coin). 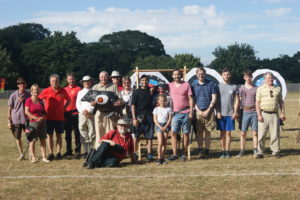 Food was, as usual, massively provided, and greatly enjoyed. Results? The least important part but anyway: 4th place (winning Strawberry Pencils) Bessy, Sue, and Joe (Bronte); 3rd place (winning a Strawberry jelly) Myah (Bronte), Nicky and Clifford (Bronte); 2nd place (Winning a 4-pack of Strawberry Chewits) Jude, Deborah (Bronte) and Darren; 1st place (Winning a jar of Tiptree Strawberry Jam) Max, Kirsty (Bronte) and Vish. The team result was scrupulously calculated, so, of course, Adel won, and, as there were eight prizes, there were eight team members (including Carol, David and Anthony) who each received a packet of Wagon Wheels (first introduced in – 1948) 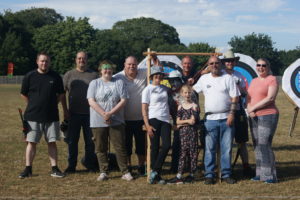