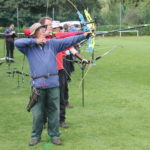 On Monday August 27th, 19 archers assembled, despite the weather, to contest the annual Club Championships. Yes, sighters were meant to be at 10:30, but there were delays, and other delays so it was nearer 11 when the action started. Almost at once the fussier archers decided they needed a new face on their boss. But the rhythm of shooting soon picked up. The ladies’ Best Gold was settled early on – there was only one candidate, and so long as she got a gold the trophy was hers. The competition for the Junior best Gold – with two candidates, each recording the best shot at least once. The gents’ competition was a tenser tussle, with the lead passing between three of the four candidates at least once. But it was all settled by the lunch break.

The usual lunch – chilli, curry, rice, savoury snacks, cakes, crispy things and tiramisu – was devoured. And we were joined for the afternoon by Steffi (who, as usual, refused to score) and Tony. Overall a good turnout. The Worst White was won in perfect fashion, with an arrow tangential to the outer ring of the white, the sort of WW you dream of.

Perhaps the archer of the day was young William Clancy, who brought along his own bow for practice behind the line as others shot. It was lovely to see him awe-struck by the skill and finesse with which his father performed actual big boys’ shooting. And Daddy won the biggest trophy of the lot (though not the longed for Wooden Spoon).

More cake, tea and tiramisu, and we rounded off the day, tired and satisfied.