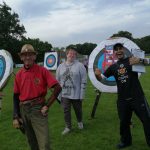 Once more, the might of Bronte Archers clashed with the Bowmen of Adel to determine who were “Lords of the North”, this time at Adel. Under the benign and impartial guidance of some man with a beard, the two teams were set several traditional challenges. Some triumphed, others fell far, far short.

There were the usual rounds – shooting wrong-handed, the Snake, the Pig, the Clout – though they were set at a slightly longer distance this year. The “Special” target was based on three major current sporting events. Archers were supposed to recognise the flags of Kazakhstan , Uzbekistan, Mongolia, Chinese Taipei and Malaysia as belonging to Archery nations, while Colombia, Venezuela, Chile and (yes) Japan and Qatar were taking part in the Copa America. The chap in charge made a pig’s ear of the rules, but applied that ear equally across the board. (Sorry). There was an amusing twist to the forfeits, (Well, amusing to those who didn’t have to do it) as we introduced “Carol’s Cauldron”, so called because Carol did not suggest it, and it was not a Cauldron but a plastic bucket. Yes, the poor unfortunates who hit the right forfeit had to “Bob for Strawberries”. And very game they were too, despite the water getting suspiciously polluted towards the end.

To achieve impartial fairness, the team scores were totalled, but then averaged to determine the winner. Adel still won

The full results are HERE

Thanks to all who turned up, especially those who brought food. Next year…. Who knows?